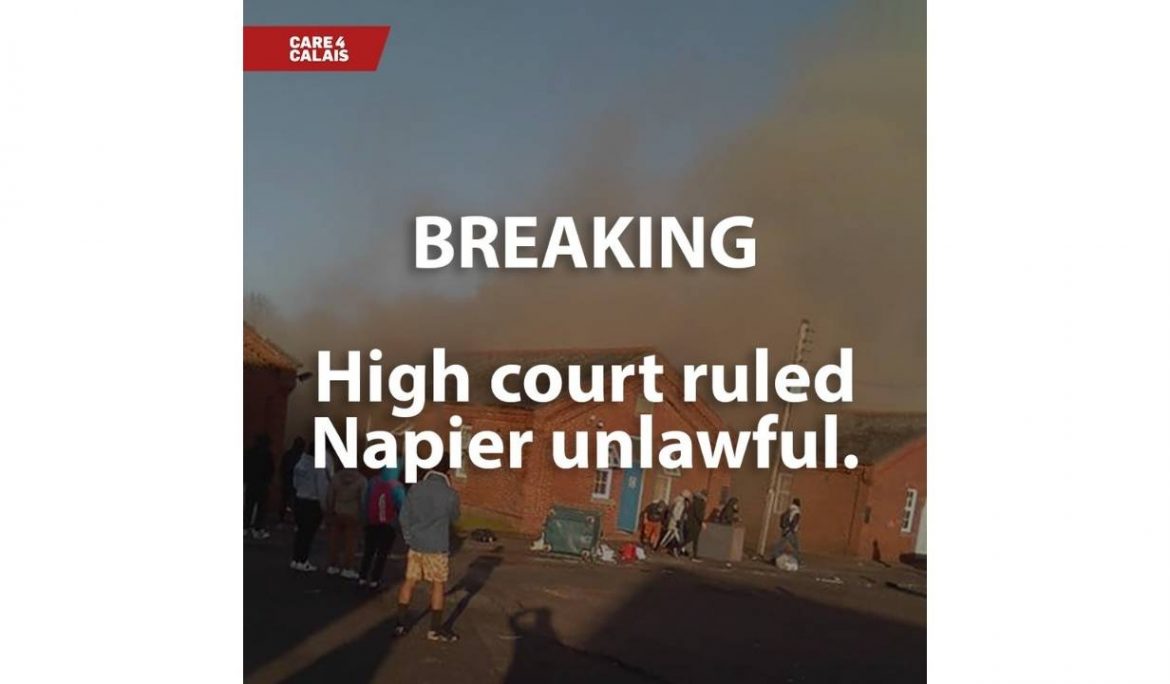 However over 265 asylum seekers remain accommodated at Napier barracks today and the Government intends to increase numbers up to 337. Already, since being refilled, over 45 people have been transferred out of the Barracks on the grounds of vulnerability following the legal work, indicating that there is still no adequate screening process in place.

We are delighted with this judgement, which follows long months of the Government ignoring a mountain of evidence and complaints that the Barracks are not only unsuitable, but highly damaging, to vulnerable people entrusted to their care. It is disappointing that evidence provided by NGOs and regulators was ignored for so long and it has taken legal action to reach this verdict.  However today Napier barracks remains in use and our goal must be to get those inside moved to suitable accommodation as soon as possible.  Penally was closed and Napier should be too.

In a judgment handed down today, the High Court has found that Napier Barracks provided inadequate accommodation for asylum seekers, that the Defendant’s process for selecting people to be accommodated at the Barracks was flawed and unlawful, and that residents of Napier Barracks were unlawfully detained under purported Covid rules.

The claim was brought by six asylum seekers who were accommodated in Napier Barracks between September 2020 and February 2021. All of the Claimants were vulnerable victims of trafficking and/or torture, who experienced a deterioration in their mental health as a result of their accommodation at Napier Barracks and were transferred to alternative accommodation after legal proceedings were initiated.

The Court heard evidence that:

In upholding the claim, the Court found that the accommodation at the Barracks did not comply with section 96 IAA 1999 read with Directive 2013/9/EC, which sets out “minimum standards” for reception of asylum seekers (“the RCD”). In finding that the Home Secretary had acted irrationally, Mr Justice Linden stated that:

The Court also found that the process for selecting people to be accommodated at the Barracks was flawed and unlawful, both in relation to (a) the initial decision to transfer asylum seekers to the Barracks, and (b) the monitoring or review of suitability post transfer. Mr Justice Linden found that there were significant numbers of people living at the Barracks, including the Claimants, for whom such accommodation was unsuitable as defined by the Home Secretary’s own suitability assessment criteria. On the evidence, the levels went beyond a few aberrant cases which could have resulted from human misjudgement or error.

Finally, the Court found that from 15 January 2021 when an instruction was given that residents were not to leave Napier Barracks until they were allowed to leave, the Claimants were unlawfully detained both at common law and under Article 5 of the European Convention on Human Rights.

Future use of the Barracks

Despite emptying Napier Barracks in early April 2021 and ongoing concerns from senior public health officials that the site can never be made COVID-19 secure, on 9 April 2021 the Home Secretary began re-filling the barracks. There are currently over 265 residents again sleeping in dormitories of up to 12 people and we understand that the intention is to refill the barracks to over 300 residents.

Since 9 April 2021, over 45 people have already been transferred out of the Barracks on the grounds of vulnerability following the threatening or issuing of legal proceedings, indicating that there is still no adequate screening process in place.

As Mr Justice Linden noted in his judgment, whether “improvements will address the fundamental issues in relation to the use of the Barracks to accommodate asylum seekers remains to be seen”.

We have not yet been informed whether the Home Secretary will seek to appeal the judgment.

“Based on government evidence, the High Court has found that the Home Secretary acted both unlawfully and irrationally in accommodating our clients at Napier Barracks, placing them at risk of a fire and contracting COVID-19, both of which happened. People seeking asylum are more vulnerable to physical and mental illness. They have the right to be treated with dignity and should not be accommodated in detention-style barracks. Almost 300 people are still accommodated at Napier and we urge Priti Patel to close the Barracks once and for all”.