People who are brave and resilient enough to have escaped from the worst terrors in this world should not be risking their lives once again to claim asylum in the UK. We know it’s possible to give people safe passage – we do it for Ukrainian refugees – so why not do it for other refugees?

By using an online screening process and issuing travel visas, we could bring refugees to the UK safely to claim asylum – putting people smugglers out of a job. This worked for Ukrainians. So why won’t the Government act?

You can help spread the word that there’s a kinder and more effective way to stop Channel crossings and save lives. Share the video now, it takes just 30 seconds. 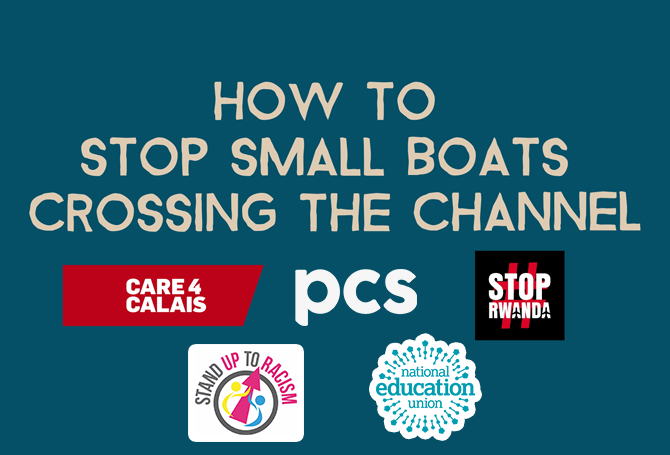 People who are brave and resilient enough to have escaped from the worst terrors in this world should not be risking their lives once again to claim asylum in the UK. We know it’s possible to give people safe passage – we do it for Ukrainian refugees – so why not do it for other refugees?

By using an online screening process and issuing travel visas, we could bring refugees to the UK safely to claim asylum – putting people smugglers out of a job. This worked for Ukrainians. So why won’t the Government act?

You can help spread the word that there’s a kinder and more effective way to stop Channel crossings and save lives. Share the video now, it takes just 30 seconds.

There are lots of myths about people seeking safety on our shores, and none of them get us any closer to a solution. Want the truth about how to stop dangerous small boat crossings? Read on…

How could a visa system work?

There would be an online application process, similar to the one that Ukrainian refugees currently use. This would determine whether someone was likely to have a viable claim for UK asylum and, if so, they would be issued with a visa to cross safely to the UK. On arrival in the UK they would enter the normal asylum process and make their asylum claim.

If we gave people visas to travel safely, would more people come?

The Government has tried all sorts of things to reduce the number of people crossing the Channel in small boats – but none of it has worked. In fact, more people than ever are crossing in small boats since the Rwanda policy was announced.
The truth is, people in desperate situations will continue to risk their lives to find safety, until there’s a safer option. We’ve seen that travel visas worked for Ukrainian refugees, it’s time for the Government to roll that option out to everyone who is entitled to seek asylum in the UK.

Can we really afford for people to come to the UK?

The simple answer is, yes! Once their asylum claims are approved people can work and support themselves, they can pay tax and use their skills and talents to benefit our society, there is no reason for them to cost us anything.
This year we have issued 166,000 visas to Ukrainians and 88,000 to people from Hong Kong. There is no reason we can’t do the same for just 40,000 from everywhere else in the world, particularly when we have 1.3 million job vacancies that we are unable to fill.

Why do people cross safe countries?

Let’s put this another way – why shouldn’t they? If every refugee stopped in the first safe country, all Europe’s refugees would be massed in Greece or Italy and that makes no sense. The fact is that most refugees do stop in other countries. 93% of refugees in Europe don’t head for the UK. However some have specific ties to our country such as family, friends or language. Why shouldn’t we help these people? We know that British people are just as compassionate as other people in other countries in Europe. We didn’t suggest that Ukrainian refugees should stay in Poland.

Evidence on parliaments’ website shows that 76-86% of those who cross the Channel on small boats are subsequently granted refugee status, meaning that they are most definitely genuine refugees. Another analysis by UNHCR concluded that the ‘clear majority’ of people arriving in the UK by small boats across the Channel should be considered to be refugees.

Why don’t they come the ‘legal’ way?

Everyone would prefer to travel here safely, in ferries, planes or on trains. But unless you are Ukrainian, there are no legal routes to the UK. The Government has closed down all legal routes so that in order to claim asylum in the UK you have to be physically present in the UK. But it has not provided safe, legal routes for people to get here – like a visa scheme with an online screening process. That means that to claim asylum, people have to risk their lives in lorries or small boats.

Would some visas be refused? Wouldn’t these people still get in small boats?

There would be screening so that an individual must have a viable basis for making a UK asylum claim in order for a visa to be issued. So, yes, some people would be refused.
But remember that 98% of those who currently cross on small boats claim asylum on arrival – their incentive to cross is the hope of a safe life. If the visa is denied that possibility is removed. It is one thing to risk your life for the hope of a safe future, quite another to risk it for a life of permanent instability.

Why are more of the people in small boats men?

The journeys to Calais are incredibly harsh. From Africa they might cross the Sahara which takes many lives, then Libya, which is lawless; no woman could cross without being raped. From the Middle East the journey is across the Balkans where night-time temperatures can be minus 20 and the borders are rife with beatings and human rights abuses. Few women and children would survive these horrors.
Many families will not risk their daughter’s safety on a journey to Europe. People trafficking, sexual abuse, exploitation and violence is far more prevalent for a woman or girls travelling as a refugee, so the men of the family take on the duty, claiming asylum if they survive to bring their family over safely.
So the young men you see on these boats are doing their best to protect their families. Their mothers, grandmothers, sisters, babies, daughters.
How often does a father say they’d die for their daughter, a husband say they’d die for their wife? Well these guys are putting it into practice. Let’s hope and pray that our sons, husbands, partners, nephews and brothers never have to have their love tested like this.

What will the French say about plans for a visa scheme?

A scheme like this would be a solution for France just as much as the UK. A key advantage of this proposal from the French point of view is that it would avoid the need for a processing centre in France and would discourage any build up of refugees in Calais. Following the invasion of Ukraine there was an initial build up of Ukrainian refugees in Calais however, once the visa system was working this quickly disappeared.

What if they don’t have documents?

If someone does not have ID documents to upload as part of the online process they will have to attend a physical appointment at a visa application centre to have their photograph and fingerprints taken. These centres are located across Europe.
If suitable ID documents are uploaded online and the visa is issued electronically they will need to attend a biometric appointment on arrival in the UK.
Download our policy paper